June 2018: Families and how to define them in modern society

In May this year, Australia celebrated National Families Week, coinciding with the United Nation’s International Day of Families. These celebrations highlight the vital role that families continue to play as the central building block of Australian society and communities.

This reflects the fact that in modern Australia, families are characterised by increasing diversity. The ‘traditional’ or ‘nuclear’ family unit, comprising mother, father, and two children is no longer the only way we think about and define our families; rather, the concept of ‘family’ is dynamic and often involves the transition into different family forms over time. For example, trends in divorce and remarriage have contributed to increasing numbers of one-parent, step and blended families. The 2016 Census found that 8.3 per cent of households contained extended family members and about 43 per cent of children under the age of 13 years were living in non-traditional households, such as with a non-biological parent figure, a sibling, or a grandparent (Australian Institute of Family Studies, 2016).

The focus of Relationships Australia’s June 2018 online survey was to find out how Australians think about and define their family in modern society.

Around 900 people responded to the Relationships Australia monthly online survey in June 2018. Just under four fifths (78%) of respondents identified as female, with more female than male respondents in every age group (see Figure 1 below). 85 per cent of respondents were aged between 20-59 years, and 57 per cent comprised women aged 20-49 years. As for previous surveys, the demographic profile of survey respondents remains consistent with our experience of the groups of people that would be accessing the Relationships Australia website. 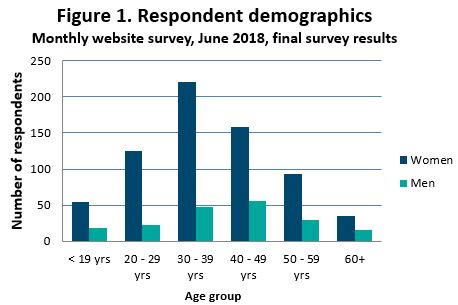 Per Figure 2, survey respondents who identified as male were more likely (45%) than their female counterparts (38%) to describe their family as a ‘nuclear family’ (defined as one or more parents and their children living in the same residence or sharing the closest bonds) and respondents aged under 19 years were the most likely to describe their family this way compared to the other definitions given. Survey respondents aged over 60 years were more likely to report a broad mix of family types and definitions.

Survey respondents aged over 60 years were also the most likely to report the least number of people who come to mind when thinking about family (Figure 3). There was little difference between the reports of men and women.

People aged under 19 years (26%) and over 60 years (29%) were the most likely to report that they could only ask one person in their family for help if in need (Figure 4). On the other hand, around one third (31%) of respondents aged 30-39 years reported they had a large amount (5-10) family members to whom they could turn for help. Comparing gender, 24 per cent of men reported they had just one family member they could ask for help, compared with 19 per cent of women.

When asked to choose as many as applied, the majority of survey respondents reported that the bonds of love, closely followed by blood bonds, are what tie them together as a family (Figure 5).

Two-thirds of men (33%) reported that family should be defined as ‘immediate family related by blood, marriage, de facto, same-sex relationship or legal adoption’, compared with 25% of women. The majority of both male and female respondents (67%) reported that the definition of a family should be inclusive of each of the definitions given (Figure 7). 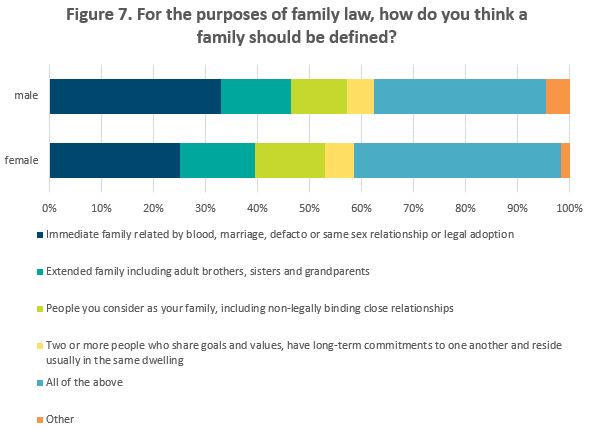