For some people, the Christmas period can be a time of high stress. While for many families, Christmas is a time for celebration, down-time and holidays, it is also the most likely time of the year for many people to experience anxiety and depression, particularly those who have recently divorced, have experienced a recent death in the family, or are socially isolated. People can feel increased financial pressure from the costs of buying gifts, entertaining and holidays, and there can be added strain from spending time with family members. For those people with complex family structures, Christmas time can present even greater challenges.

Studies also show a spike in death rates around Christmas.  However, while there is a greater chance of dying on Christmas day, the day after Christmas or New Year’s Day than any other single day of the year, contrary to popular belief, rates of suicide do not increase at Christmas time.  Higher death rates at Christmas are associated with disease and natural causes, with research suggesting that the higher death rates may be due to stress and loneliness exacerbating existing conditions and people being slower to seek medical treatment in the holiday period (Annenberg Public Policy Center, 2010).

While preparing for Christmas may be stressful in itself, factors commonly associated with poor mental health at other times of the year are also more prevalent in the Christmas period.  These include relationship breakdown, workplace stress, and financial pressures (Hawton, 1997; NMHC, 2013).

In December 2014, Relationships Australia asked visitors to our website to participate in a two‑minute survey that asked them about their experience of stress at Christmas time.  Respondents were asked to report on a five-point scale (not at all, slightly, moderately, quite a bit, extremely) how much a selection of factors commonly associated with Christmas stress impacted on their family relationships.

Around 850 people responded to Relationships Australia’s online survey between 1 and 18 December, 2014. Similar to the October and November online surveys, around 80 per cent of respondents identified as female, with women outnumbering men in every age group (see figure below). Around 90 per cent of survey respondents were aged between 20-59 years, with the peak response category capturing the views of women aged from 30 to 39 years.

The demographic profile of survey respondents remains consistent with our expectations of the groups of people that would be accessing the Relationships Australia website.

Around one-fifth of men and women responding to the monthly online survey reported their family relationships were affected ‘quite a bit’ or extremely’ by issues relating to children from a previous relationships at Christmas.  Given that this question is likely to have lower relevance to all survey respondents than other questions, this result indicates a high rate of family relationship stress at Christmas for blended and/or separated families.

The largest effect on family relationships reported by men responding to the monthly online survey related to spending time with extended family, including in-laws (40%).  Around thirty per cent of women also reported that their family relationships were affected ‘quite a bit’ or ‘extremely’ due to spending time with extended family at Christmas, similar to women’s reports of work/life balance and financial issues. 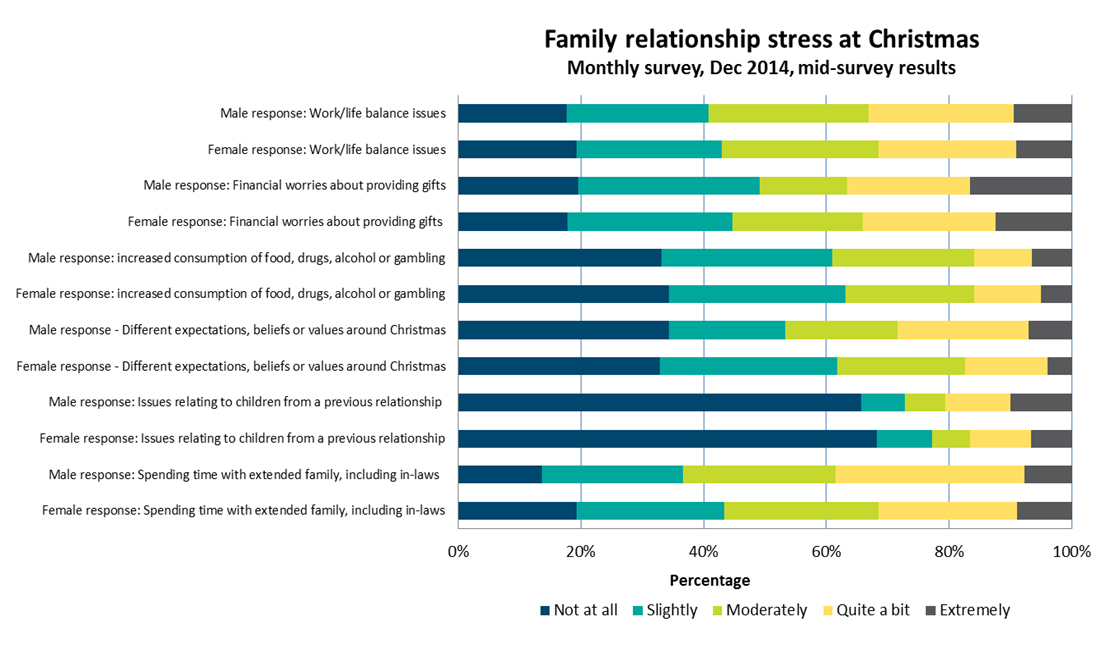