According to Braithwaite (2004), restorative justice is:

…a process where all stakeholders affected by an injustice have an opportunity to discuss how they have been affected by the injustice and to decide what should be done to repair the harm. With crime, restorative justice is about the idea that because crime hurts, justice should heal.

Restorative justice can be seen as a subset of restorative practice, which offers a common thread to tie together theory, research and practice in diverse fields such as education, counselling, criminal justice, social work and organisational management.  The fundamental premise of restorative practice is that people are happier, more cooperative and productive, and more likely to make positive changes when those in positions of authority do things with them, rather than to them or for them.

The use of restorative practices can:

While restorative practices have been widely used in youth justice and education settings to repair harm, there is a great deal of debate about its suitability in cases of family violence.  Chief among the criticism is that when applied to intimate partner violence, these informal practices can fail to protect the safety of survivors or lead to re‑victimisation.  It is also argued that restorative practice may minimise the harm done to women or appear too lenient in the punishment of perpetrators.  However, other commentators have made opposing arguments, seeing restorative practice as offering a better way to seek safety and accountability than the current legal system.   Pennell and Burford (1995), for example, contend that family group conferencing offers a way to expand a coordinated community response to stopping violence against women and their children, recognising that family violence cannot be stopped without the concerted and cooperative effort of families, communities, and state institutions.

In November 2015, Relationships Australia’s online survey sought further understanding of the community’s views on the applicability of restorative practices to family violence by posing a few questions to visitors to our website.

More than 1900 people responded to the Relationships Australia online survey in November.  Around four‑fifths of survey respondents (80%) identified as female.

As was the case for last month’s survey, more females than males responded in every age group (figure 1).  More than ninety per cent (92%) of survey respondents were aged between 20‑59 years, with the highest number of responses collected for women aged between 30-39 years (inclusive). 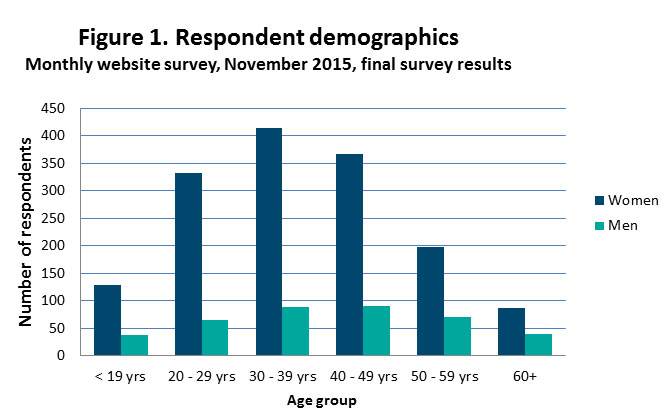 The demographic profile of survey respondents remains consistent with our experience of the people that would be accessing the Relationships Australia website.

When asked about the importance of a range of factors to the needs of victims of family violence, both male and female respondents to November’s monthly online survey assigned high levels of importance to all categories identified by the questions.  However, overall, respondents were more likely to report that family and psychological support were more important to meeting the needs of victims of family violence than the perpetrator making amends for the crime or being punished, the perpetrator apologising to the victim or financial compensation.

Relationships Australia would like to acknowledge the assistance of the Regulatory Institutions Network, Australian National University, in developing this month’s survey questions.