Social networking is one of the main reasons Australians access the internet today (ABS 2018). While social media is ostensibly helpful and beneficial for maintaining our relationships, its use has been linked to loneliness, anxiety, depression and even a decrease in our social skills (Kross & colleagues 2013). Promisingly, Baker & Oswald found that social media can have a positive impact on people’s perceptions of friendship and can provide social support for people who identify as shy (2010). In particular, single parents and those living alone are more likely to report dissatisfaction with offline relationships and therefore rely on social media to connect (Zeleznikow 2018). In romantic relationships, Zeleznikow found that ‘friending’ or ‘following’ one’s partner online can have a positive outcome for relationship satisfaction (2018). Ultimately, the effect social media has on our health and relationships is complex and difficult to generalise.

Most teenagers have grown up with access to the internet and social media. As such, they fear losing access to this digital environment (Australian Communications and Media Authority 2018). Further, social media use is closely interwoven with children’s sense of self and community and allows them to express their creative practices in novel ways (Lim 2013).

Yet the prevalence of cyberbullying poses parenting challenges. The Parenting in the Digital Age report found that 46% of parents feel confident dealing with any cyberbullying their child may face (Australian Communications and Media Authority 2018). However, traditional media research has found that despite parent’s confidence, incumbent fears can lead guardians to engage in harmful monitoring and restriction of the child’s digital media (Valkenburg et al., 1999). Thus, it is important that both the parent and child develop a level of trust and understand how to engage in safe digital activity.

While social media use poses challenges, as it becomes increasingly embedded within the way we communicate, it is important for children to learn how to use it safely. Similarly, parents should recognise the significant role it plays as an expressive, educational and social tool. Active mediation, which involves discussions about the media young people are consuming, has the potential to mitigate possible negative outcomes (Austin et al., 1990). While these studies are based on television use, the approach can be applied to social media. Further, similar studies have found that applying the concept of participatory learning, where parents and child interact together with and through digital media, could be another useful strategy for dealing with social media use.

Due to the age of some of this research, it is reasonable to assume that these numbers have increased. Like all technology, social media use transforms rapidly and it is hard to produce research that keeps pace. As such, Relationships Australia conducted a survey in October 2019 to capture how people feel about their own, their partner’s and their children’s use of social media today. 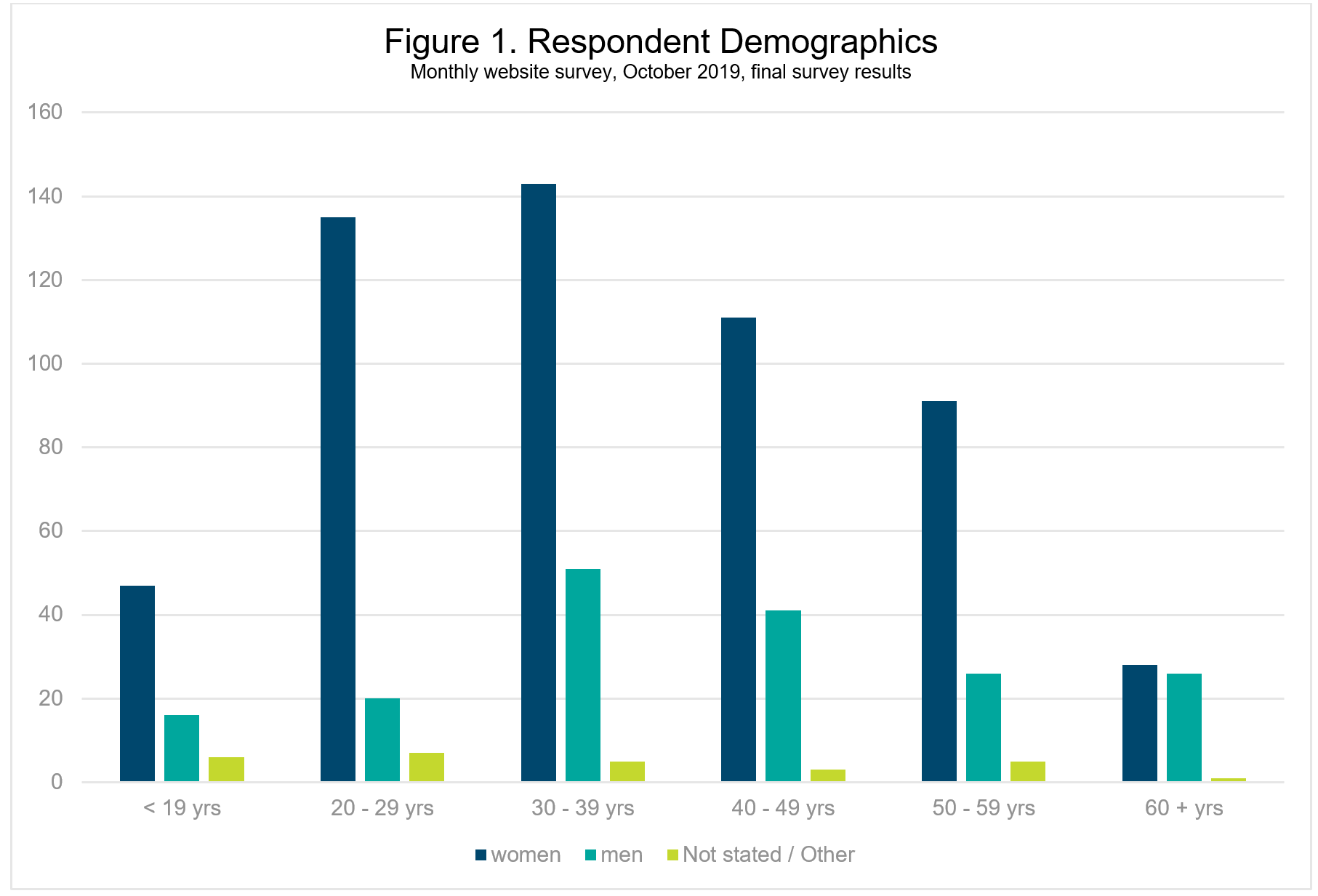 799 people responded to the Relationships Australia October 2019 survey on the impact social media has on your relationships. 71% of our respondents were women, 23% men and three percent did not state their gender or chose ‘other’ (figure 1). As for previous surveys, the demographic profile of respondents is consistent with our experience of the groups of people that would be accessing the Relationships Australia website. 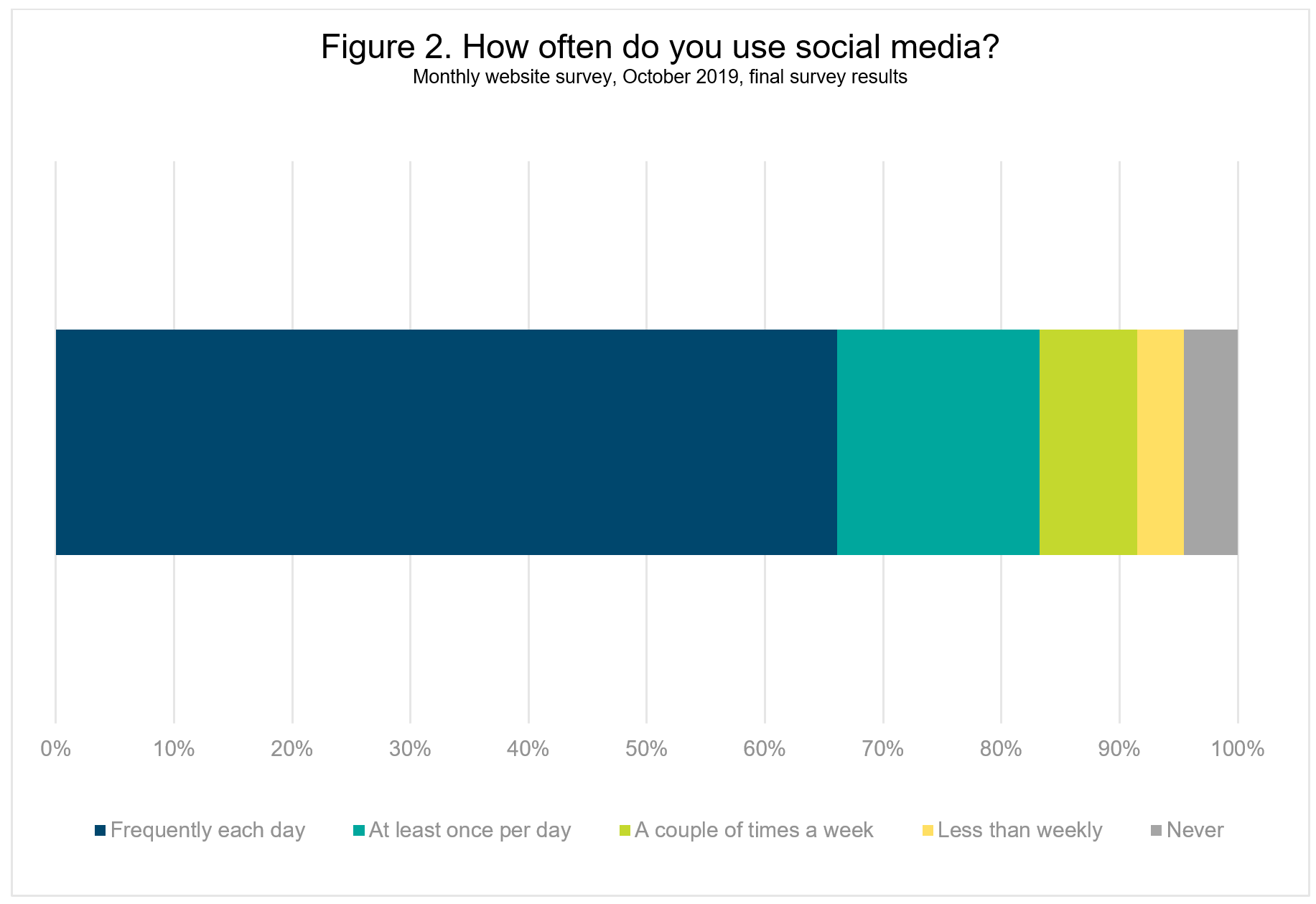 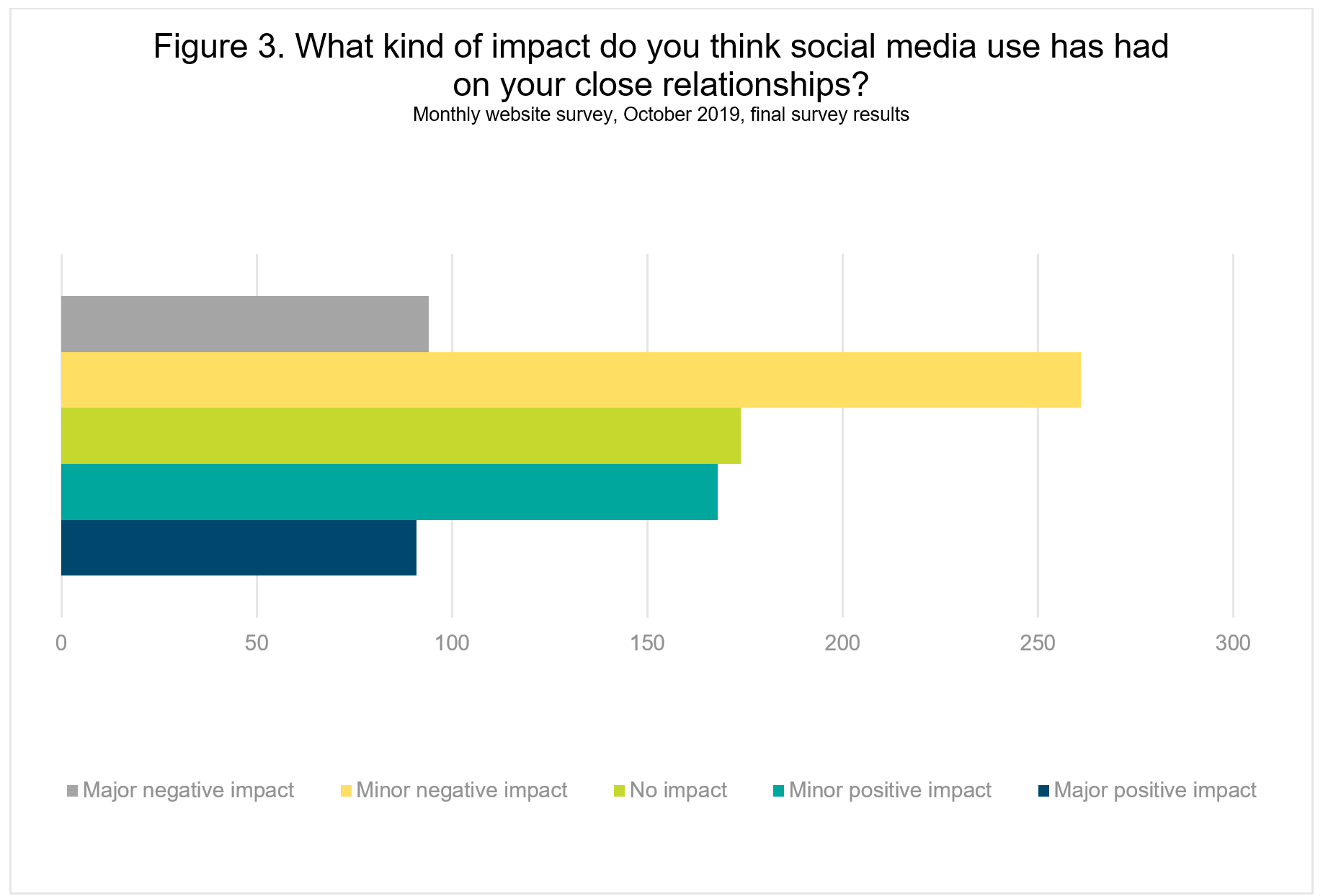 Despite social media being set-up to help you engage with your friends and family, 44% of respondents felt that social media had a negative impact (12% major and 32% minor) and 21% felt it had no impact on their close relationships (figure 3). In contrast, 35% of respondents felt that it had no impact or a positive impact on their close relationships. 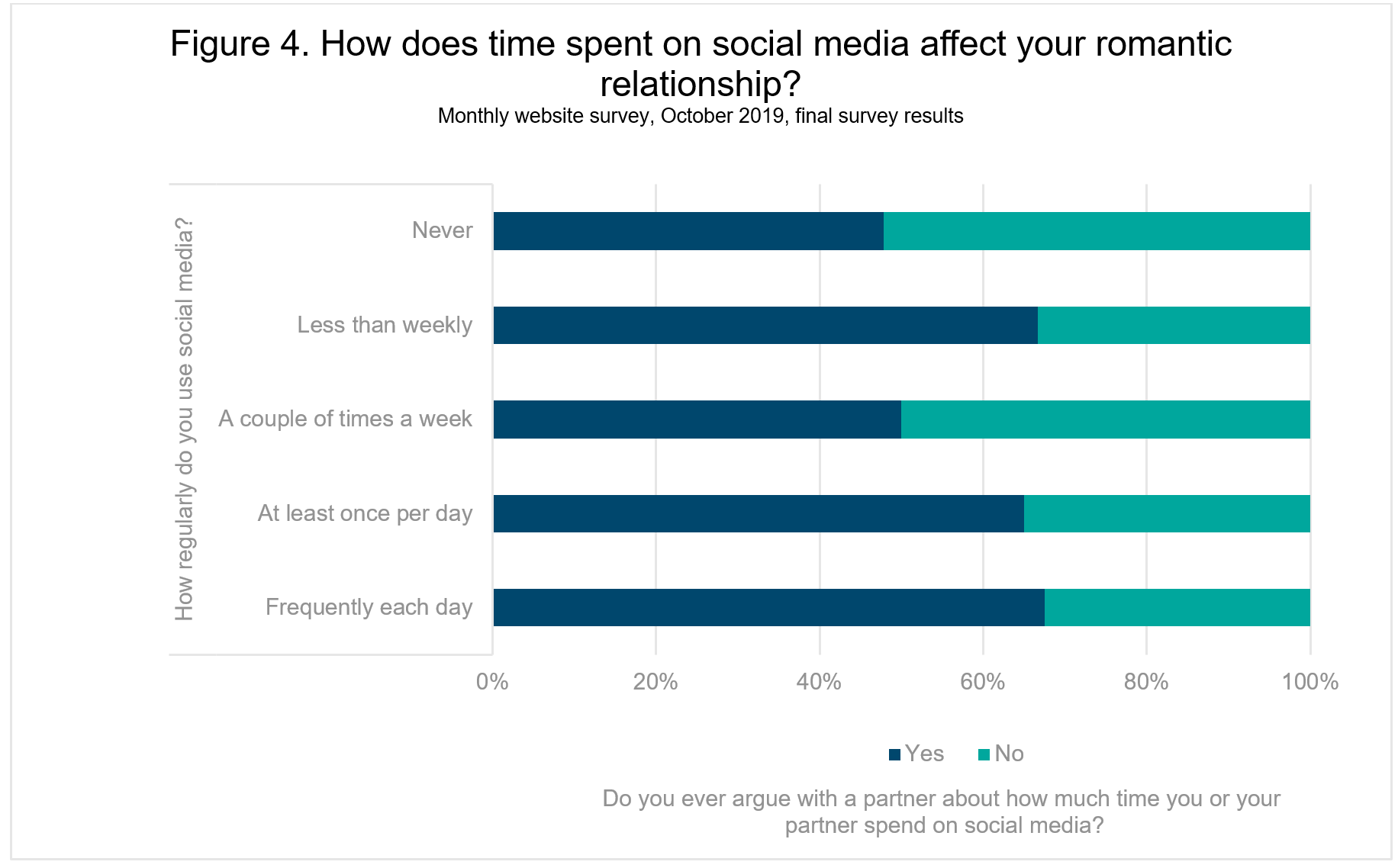 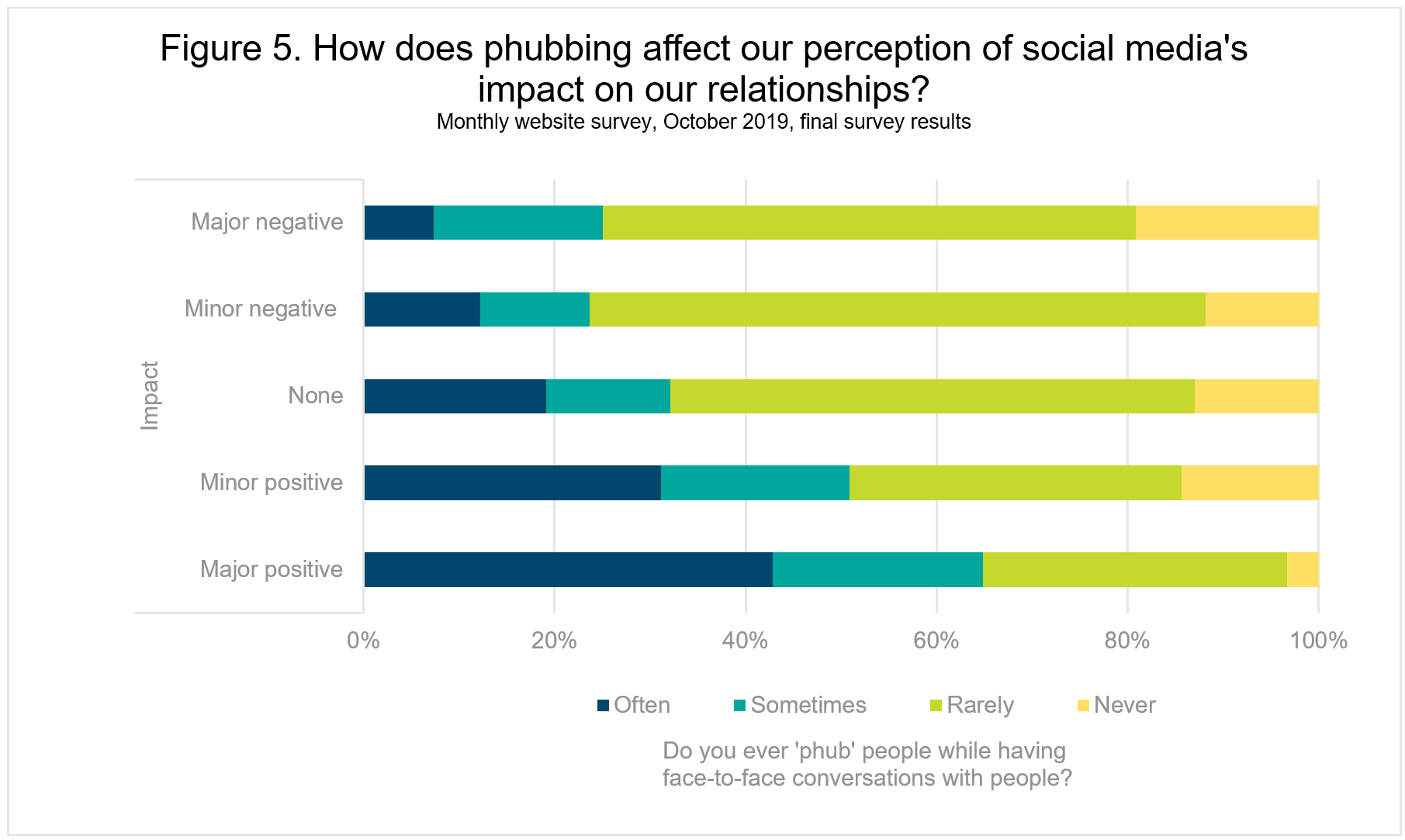 When it comes to concerns regarding children’s use of social media, parents are split (figure 6). 32% are very concerned, 22% are somewhat concerned, 24% are a little concerned and 22% are comfortable with it. 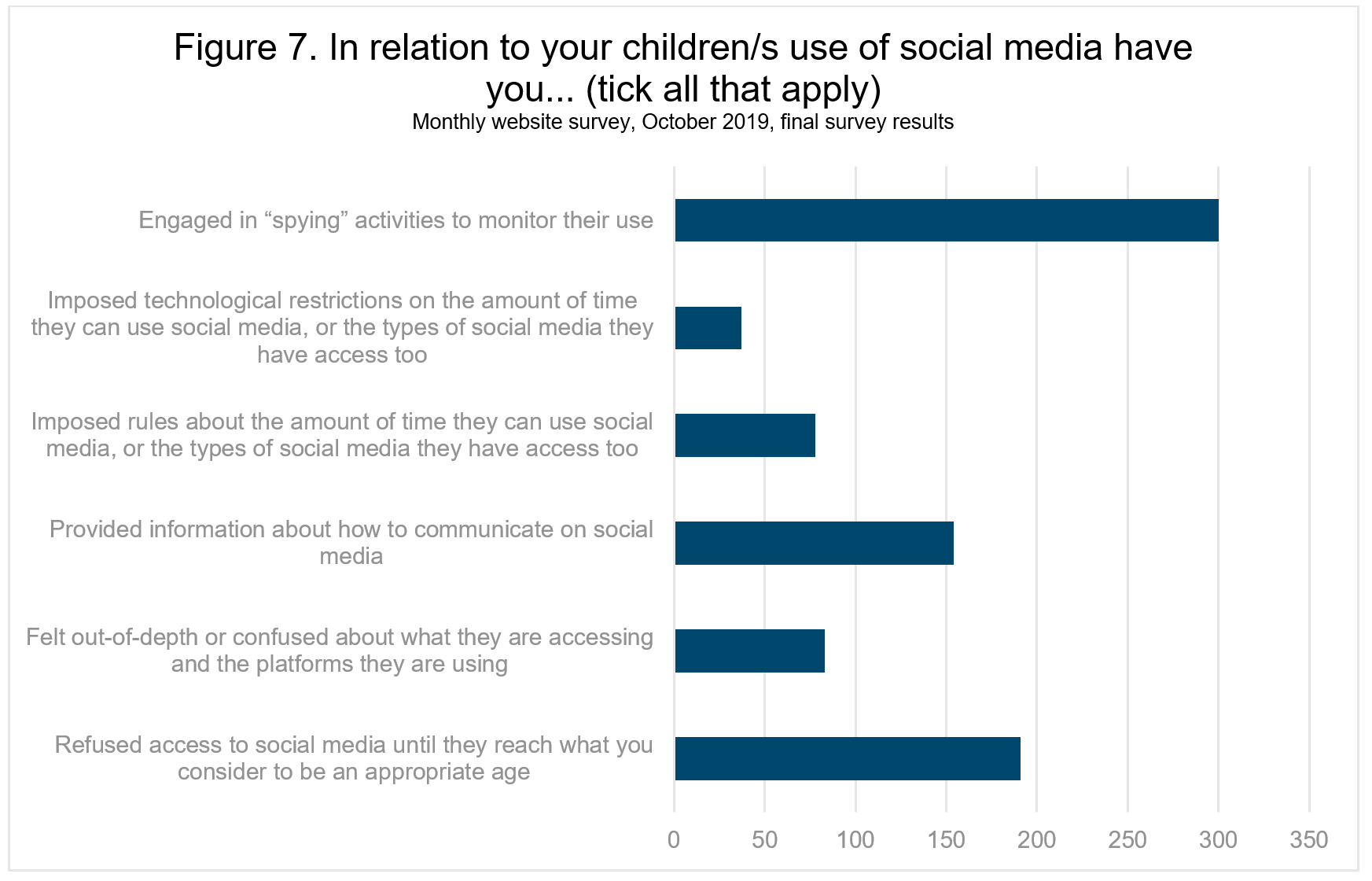 In order to assuage some of these concerns and monitor their children’s activity on the internet, many parents (300) have engaged in ‘spying’ activities (figure 7). Additionally, some (191) people have refused access until a certain age, while 154 people have provided information to their children about how to communicate on social media.

Impact of Using Facebook on Perceptions of Others’ Lives. CyberPsychology, Behavior & Social Networking, 15(2).

eSafety Commissioner. (2018). Parenting in the digital age. Retrieved from https://www.esafety.gov.au/sites/default/files/2019-07/eSafety%20Research%20Parenting%20Digital%20Age.pdf