Many Australians gamble as a form of entertainment. This might include an occasional bet on the horse races, buying a lottery ticket, playing the poker machines or a night out at the casino.

Many Australians gamble as a form of entertainment.  This might include an occasional bet on the horse races, buying a lottery ticket, playing the poker machines or a night out at the casino.

However, sometimes gambling has a negative impact on people’s lives and this is commonly termed ‘problem gambling’.  Research also indicates that the actions of one problem gambler can negatively affect the lives of between five and 10 others.  This means there are up to five million Australians who could be affected by problem gambling each year, including friends, family and employers of people with a gambling problem.  Unfortunately only around 15 per cent of problem gamblers seek help.

The focus of Relationships Australia’s April online survey was to find out whether visitors to our website have been negatively affected by gambling.   The six questions chosen for April’s survey were sourced from the nine-question Canadian Problem Gambling Index (Ferris and Wynne, 2001) whereby each response is scored as:

The score for each question is totalled, and the higher your total score, the greater the risk that your gambling is a problem.  Scores of three or more on the full index of nine questions indicate moderate to high levels of problem gambling that may lead to negative consequences.

More than 2,160 people responded to the Relationships Australia online survey in April.  Just under three-quarters of survey respondents (74%) identified as female, suggesting the survey topic was slightly less appealing to women (or more appealing to men) than the previous survey about community participation.

As was the case for last month’s survey, more females than males responded in every age group (see figure below).  Eighty-nine per cent of survey respondents were aged between 20‑59 years, with the highest number of responses collected for women aged between 30-39 years (inclusive).

Few women and men reported that they had borrowed money, sold anything or had stolen to get money to gamble (3% and 10% respectively), while just over five per cent (7%) of women and almost twenty per cent (19%) of men felt that gambling had caused health problems, including stress and anxiety. 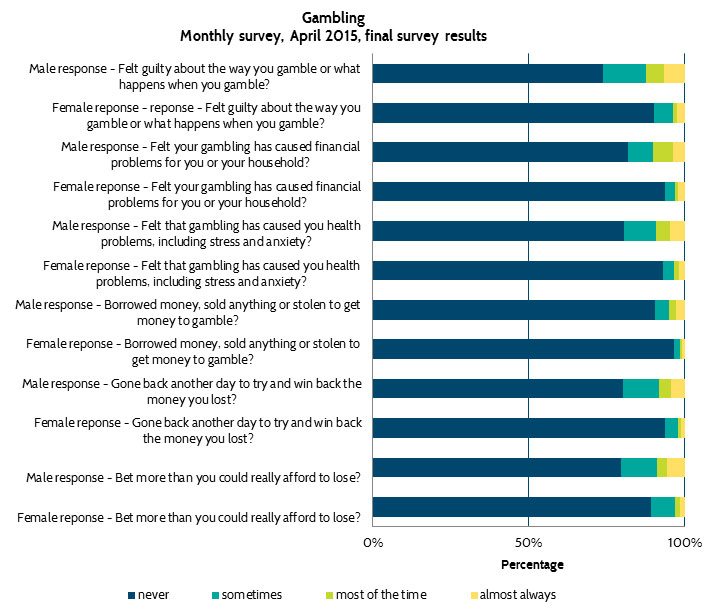 Thomas, S, and Jackson, A. (2008). Report to Beyondblue, Risk and Protective Factors: Depression and comorbidities in problem gambling.