Social identity theory was first developed by Tajfel and Turner in the 1970s.  The theory proposes that part of a person’s concept of self, in other words a person’s sense of who they are, comes from the groups to which that person belongs.  If a person belongs to groups that provide them with stability, meaning, purpose, and direction, then there will be an associated positive impact on their mental health (Haslam et al., 2016).

In this study, we measured neighbourhood identification, which reflects how much a person feels like they belong in their local community. People can belong to many groups, such as sporting teams, work teams, special interest, religious or community groups (Tajfel & Turner, 1979). However, people differ in how much they are committed to a group, in terms of their psychological and subjective sense of connection to it. When a group is particularly important and meaningful to a person, we say that it is part of their social identity (Postmes et. al., 2012).

Total possible scores on the Distress Questionnaire scale range from 5 to 25, with higher scores indicating greater psychological distress.  A cut point of ≥ 11 is used to screen for most common mental disorders, whereas a cut point of ≥ 14 is chosen for increased specificity in applications where a clinical case finding is required.

While women and young people also reported higher distress on the Distress Questionnaire in the study by Batterham and colleagues (2016), on average, monthly survey respondents reported significantly higher levels of distress across all categories of gender and age.

More than four-fifths (85%) of female survey respondents and four-fifths (80%) of men reported scores on the Distress Questionnaire above the specified score for screening for psychological distress.  More than two-thirds (67%) of women and three-fifths (62%) of men reported scores above the specified cutoff score used to indicate clinical levels of distress (table 1). 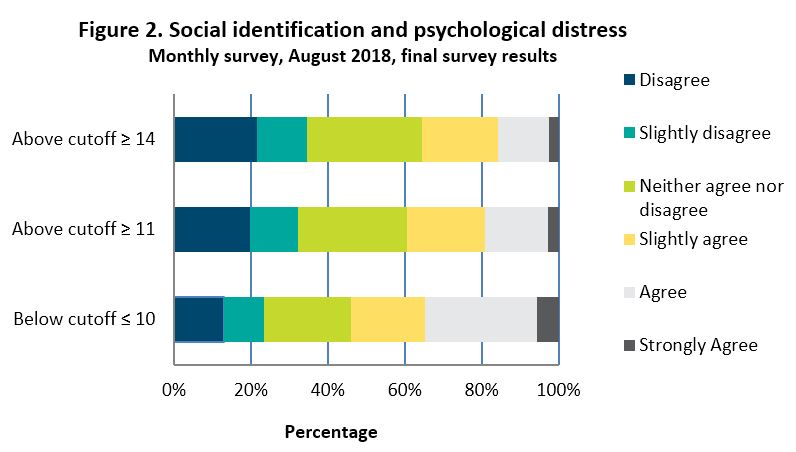 We would like to acknowledge Dr Tegan Cruwys, Research School of Psychology, Australia National University, for assistance with the design of the August 2018 monthly survey.  The data collected in this survey may be used by researchers from the Research School of Psychology to examine relationships between distress, neighbourhood identification and the characteristics of neighbourhoods. 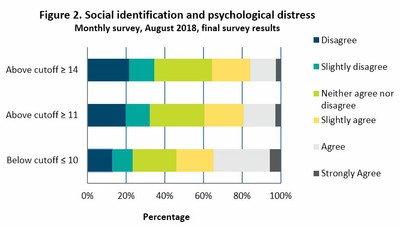