Dementia is the term used to explain an array of symptoms of a large group of illnesses that cause a progressive decline in a person’s functioning.    It is a broad term used to describe a loss of memory, intellect, rationality, social skills and physical functioning.   Over 60 different conditions are known to cause dementia symptoms, including Alzheimer’s disease, vascular dementia, frontotemporal dementia and Lewy Body disease.

Research has identified a range of factors that can increase your chances of getting dementia, including some factors that are modifiable.  There is strong evidence that cardiovascular risk factors as well as low education are associated with the risk of Alzheimer’s disease or other dementias.  For the cardiovascular factors there is particularly strong evidence for hypertension in mid-life, and smoking and diabetes in mid‑and late life.

At present there is no prevention or cure for most forms of dementia; however, some medications have been found to reduce some symptoms.

In August and September 2016, Relationships Australia asked visitors to our website to participate in a two‑minute survey that asked them a range of questions relating to their awareness of dementia and help seeking behaviour.

More than 2,190 people responded to Relationships Australia’s online survey in August and September, 2016.

The demographic profile of survey respondents remains consistent with our expectations of the groups of people that would be accessing the Relationships Australia website. 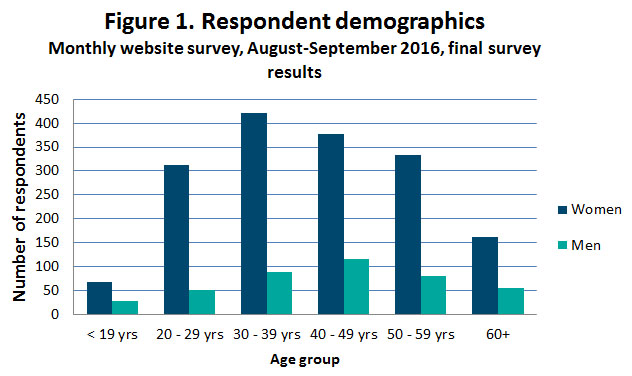 There were small but significant differences in the reports of men and women when survey respondents were asked to estimate the rates of dementia in Australia.  Women were more likely than men to report that they thought 1 in 100 or 1 in 50 people were suffering from dementia.  Men were more likely than women to report uncertainty, or rates of 1 in 10 or 1 in 5 as their estimate for the number of people suffering from a dementia-related disease (figure 2).  These reports are much higher than the actual rates of dementia in Australia for the adult population.

A significant majority of men and women had concerns about developing dementia (figure 4), with a higher proportion of women reporting concerns (68%) when compared to men (59%) .

Survey respondents were asked who they thought would be their most likely care provider if they developed dementia.  Almost half of men and women (45%) reported that their spouse was the most likely to care for them if they developed dementia.  Men (30%) were more likely than women (22%) to report a caregiver provided by the government, while women were more likely to report their child (13%) or another relative (11%) than men (9%). 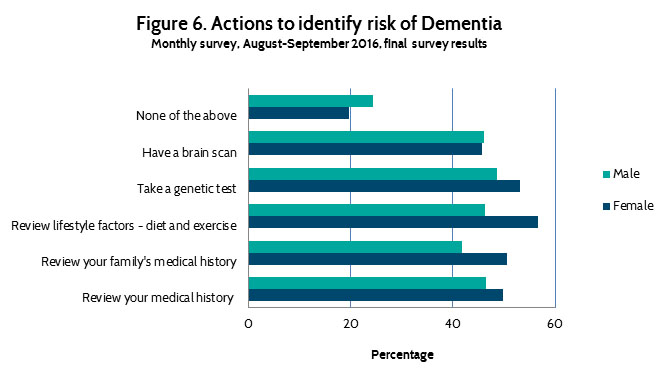 Survey respondents were also asked where they would go for information and support if someone in their family was diagnosed with dementia.  Women were more likely to report they would seek support from a doctor or health professional (75%), or dementia support organisation (73%), while men were more likely than women to report they would seek help from online or written material such as brochures or booklets (68%).  Sixteen per cent of men and fourteen per cent of women reported they would seek help from Relationships Australia (figure 7).