Relationships Australia has previously explored different ways people participate socially in their community with a view to understanding how community participation impacts on positive wellbeing.  This interest has been informed by various national and international studies that have confirmed economic and social participation are essential to the success and wellbeing of people, with high levels of participation linked to better physical and mental wellbeing.

A study by Berry, Rodgers and Dear (2007), for example, identified that while people may choose to participate in their community in many ways and at different levels, regular involvement in certain activities are especially beneficial, in particular those pursuits that are characterised by personal involvement, initiative and effort.

In 2014, Relationships Australia’s monthly online survey asked about involvement in six activities associated with wellbeing.  The focus of Relationships Australia’s February’s 2017 online survey was to find out whether visitors to our website are active participators in a number of other activities that have been found to be protective against the onset of physical and mental disorders.  The community participation questions selected for February’s online survey were adapted from the community participation scale included in the Household Income and Labour Dynamics Survey of Australia.

There were no significant differences in the reports of men and women when they were asked whether they get involved in activities for a union, political party, or group that is for or against something, or whether they get in touch with a local politician or councillor about issues that concern them.  Around two‑thirds of survey respondents reported that they never or rarely undertook these activities.

Around one-fifth (18%) of women and men (22%) responding to the survey reported that they often or very often encouraged others to get involved with a group that’s trying to make a difference in the community.  Slightly more women (24%) and men (26%) reported that they often or very often volunteered their own spare time to work on boards or organising committees of clubs, community groups or other non-profit organisations 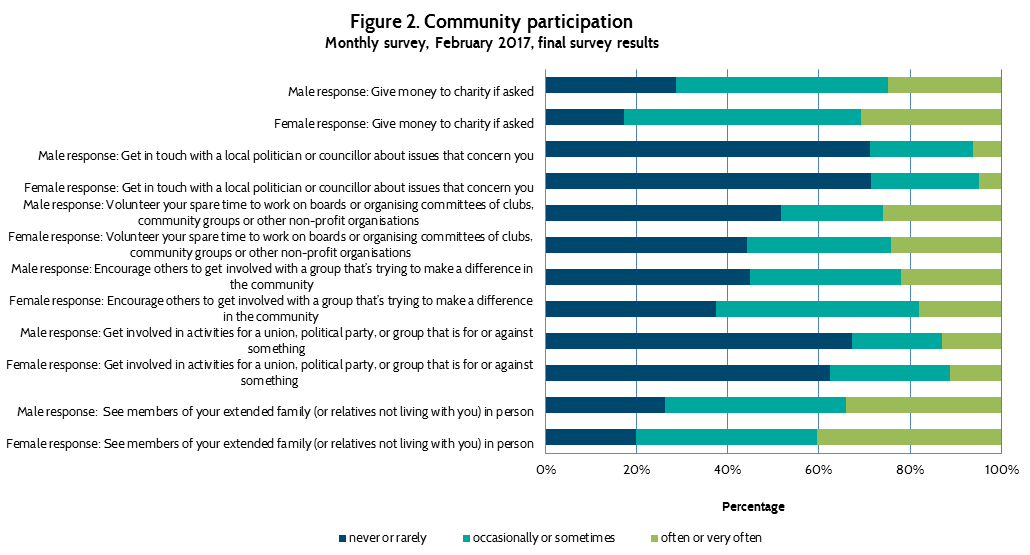