Talking politics with family or partners can be a recipe for conflict. However, completely avoiding these topics in our romantic and familial relationships is somewhat difficult. Politics and political ideas reflect our core values. Therefore, having discussions about these can be a useful way to share, discuss and discover how we differ from our nearest and dearest.

Romantically, many people seek a partner who aligns politically with them. Alford and associates found that a couple’s political affinity is one of the strongest of all social and biometric traits (2011). Findings suggest that this similarity is usually part of what draws couples together, rather than appearing through accommodations by the couple over time (Alford et al. 2011). However, this is contested and difficult to test for, as studying couples before they have met is challenging. Online dating has provided an antidote to this conundrum. Anderson and colleagues found that online, individuals evaluate potential partners more favourably and are more likely to reach out to them if they have similar political leanings (2017).

While some feel that ‘love is enough’, navigating a relationship with discordant political values can be challenging. The relationships indicators survey conducted by Relationships Australia found that ‘different expectations/values’ is a leading cause of relationship breakdowns in Australia (2011). In response, families and couples sometimes avoid talking about politics altogether. Strategic topic avoidance is a strategy used to maintain emotional closeness while avoiding potentially divisive discussions (Dailey & Palomares, 2004). However, learning to talk about politics in a respectful and open-minded way can be part of the process of socialisation and a way to learn democratic skills (Levinsen & Yndigegn, 2015). Similarly, political discussions between generations leads to greater civility (Bloemraad & Trost, 2008).

The June 2019 survey sought to explore individuals’ attitudes towards bipartisan relationships, how their politics align with their partner’s and family, and strategies for having political discussions with their families.

As for previous surveys, the demographic profile of survey respondents is consistent with our experience of the groups of people that would be accessing the Relationships Australia website. 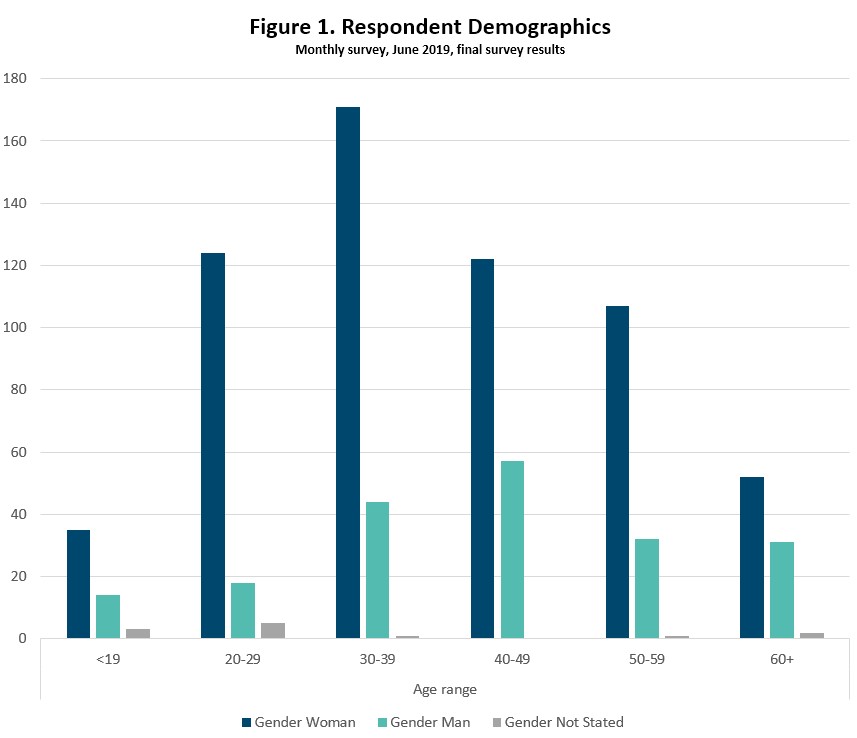 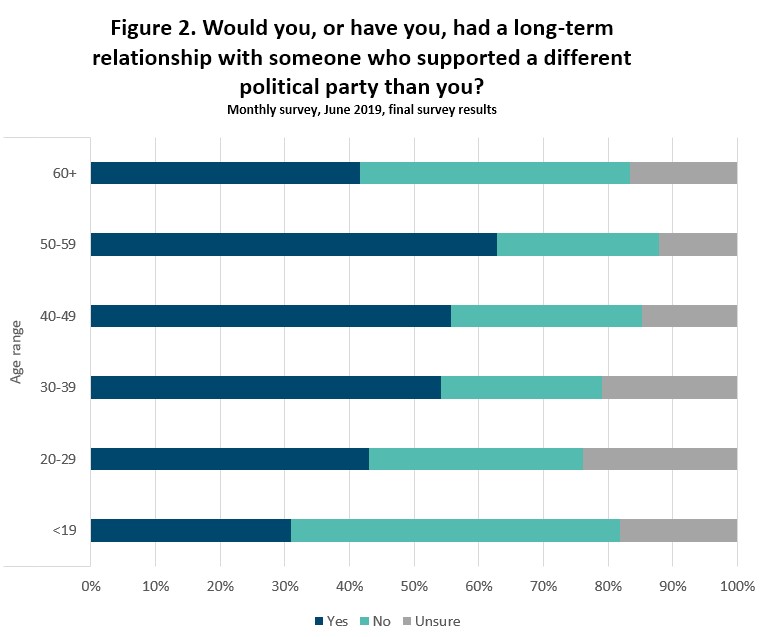 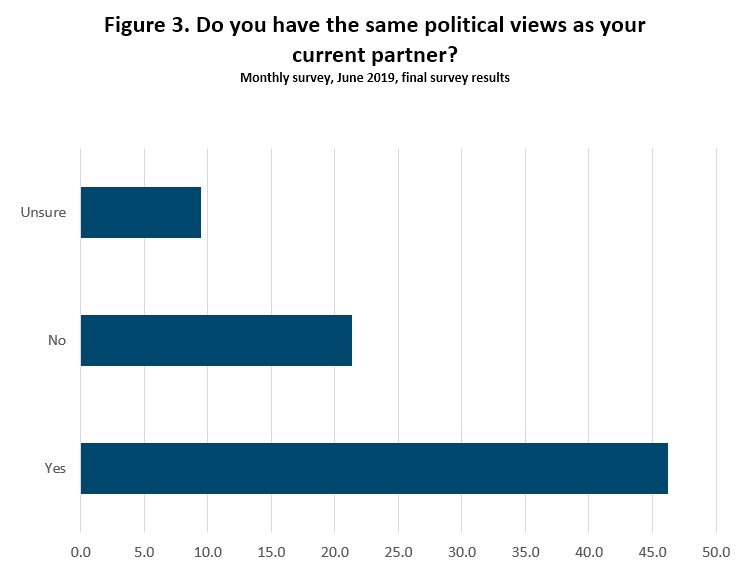 Further, only five percent of respondents said they had experienced a relationship break‑down due to political differences (Figure 4). This suggests the willingness of respondents to enter into relationships with political counterparts (illustrated in Figure 2) is either theoretical (they are willing to but have not done so) or, if the relationship has broken down, it has done so for reasons other than politics. 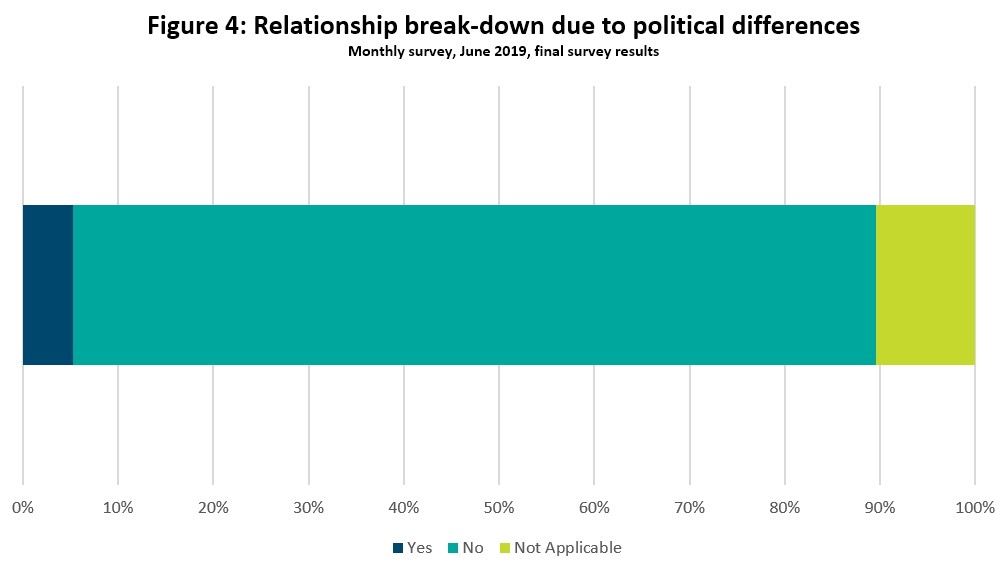 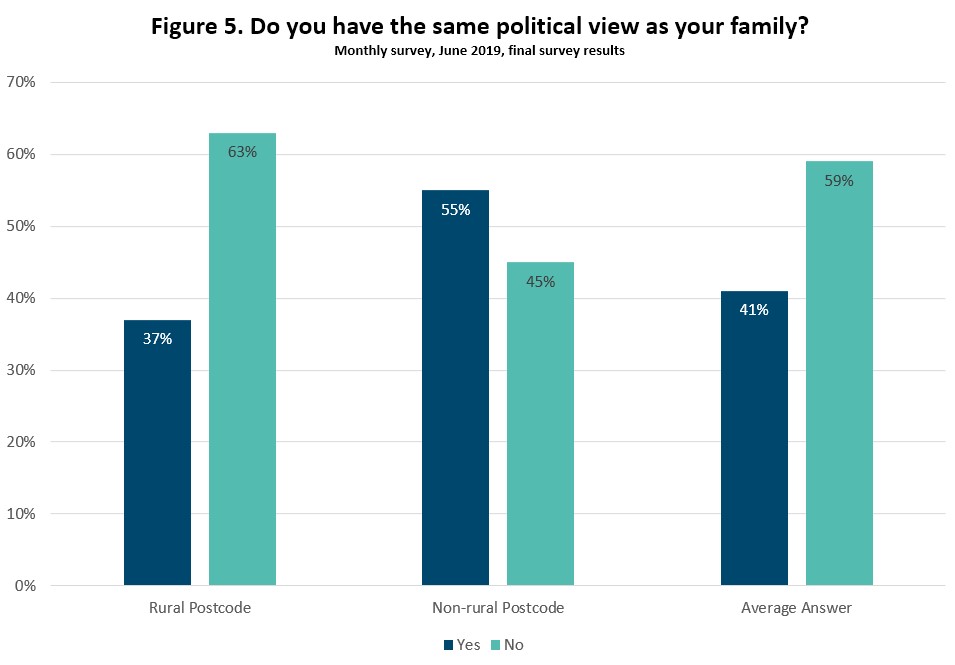 When discussing politics, fifty-three percent of respondents suggested that they would adopt a neutral/positive response, stating that they would either listen respectfully (49%) or reconsider their own opinion (4%) (Figure 6). Despite this, only nineteen percent of these respondents felt positively (happy or very happy) when speaking about politics with their families (Figure 7). This suggests that politics remains a somewhat uncomfortable topic, despite widespread understanding that openness to others’ opinions is appropriate. 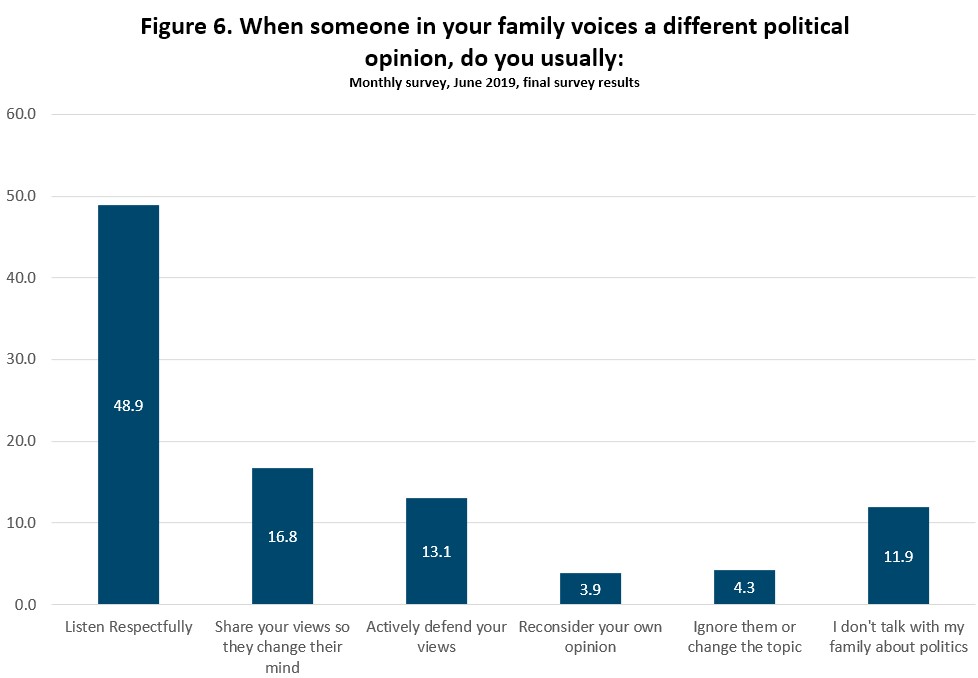 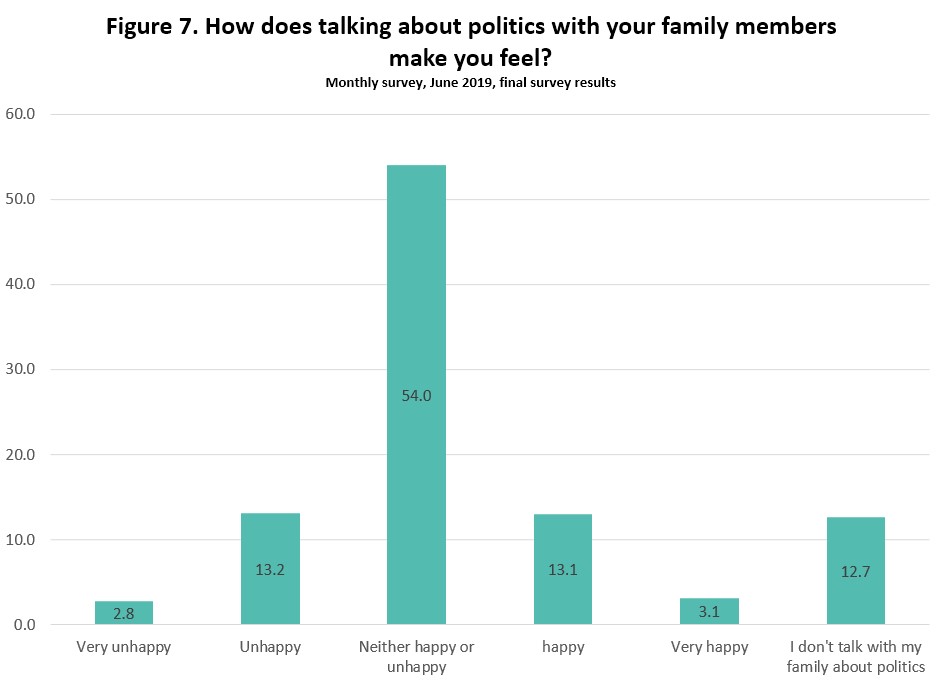