Sexting is a term that originated in the media by collapsing the terms sex and texting.  It is generally defined as the digital recording of nude or sexually suggestive or explicit images and their distribution by mobile phone messaging or through social networking platforms such as Facebook, Instagram and Snapchat (Lee et al. 2015).  In this study, the term sexting also extends to the sending and receiving of sexually suggestive texts.

Legislators, policymakers and the media have noted and responded to the risks associated with sexting including child pornography, non-consensual use of images and coercion.  However, despite this, in a recent Australian study of young people the majority of sexting was found to occur without negative consequences and within existing relationships. It also suggests that while a significant number of young people engage in consensual sexting, only a small number do so frequently.

As for previous surveys, the demographic profile of survey respondents remains consistent with our experience of the groups of people that are accessing the Relationships Australia website.

More than half of women (54%) and fewer than half of men (45%) reported that they had sent a sexually suggestive message, picture or video of themselves (figure 2).

The main reason cited by both men and women for sending a sexually suggestive message, picture or video of themselves was to be fun or flirty (men 65%, women 58%), consistent with previous studies examining sexting behaviour.  The second most common reason reported by men for sexting was because they had received one, while women were more likely to report that they had sexted as a ‘sexy present’.  Women were more likely than men to report that they had sexted in the past to get or keep a person’s attention (men 6%, women 7%) or because they were pressured to send it (men 1%, women 6%). 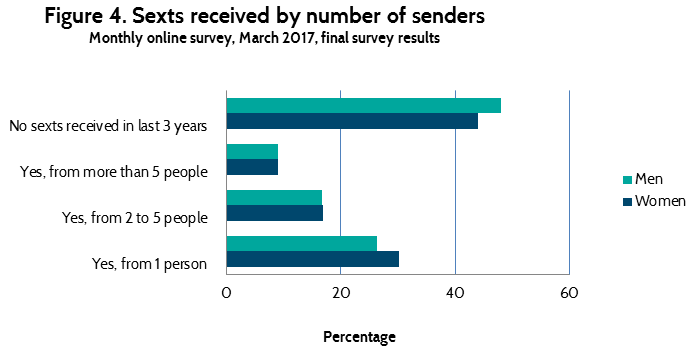 Dobson AS and Ringrose J (2015). Sext education: pedagogies of sex, gender and shame in the schoolyards of Tagged and Exposed. Sexuality, Society and Learning, Volume 16(1)