The national definition of bullying for Australian schools defines bullying as an ongoing misuse of power in relationships through repeated verbal, physical and/or social behaviour that causes physical and/or psychological harm (Dept. of Education, 2015).  Three main types of bullying are commonly identified: overt bullying, which includes visible physical or verbal bullying, or exclusion; covert bullying, which is not as easily identified and includes the spreading of rumours; and cyber bullying, a newer form of bullying that is facilitated by increased use of social media.

The term bullying is sometimes confused with harassment and discrimination, but while there is some overlap, the difference is that bullying happens within social relationships, featuring repeated and harmful behaviours that stem from a misuse of power.  Research finds a complex relationship between perpetrators and victims of these behaviours, with a portion of students acting as ‘bully-victims’ who are both victim to and perpetrators of bullying at different stages.

Bullying has been found to adversely impact both bullies and victims.  Bullies, for example, are at higher risk of substance abuse, depression, anxiety and hostility than non-bullies.  For bullying victims, being targeted can result in increased suicide risk, depression, poor school performance and physical health, and low self-esteem.  Further, the impact of bullying in childhood may last for many years (Alannah & Madeline Foundation, 2018), with direct and diverse effects of bullying evident long after schooling is complete.  Children who are both victims and perpetrators of bullying often suffer the worst effects (Copeland et al. 2013).

In March 2018 Relationships Australia explored aspects of bullying in schools via the monthly online survey by asking visitors to our website a series of questions about their opinions and awareness of bullying, along with avenues they might source if they needed help.

Survey respondents were asked which types of bullying they considered caused the most harm to children. Options include physical bullying (pushing, tripping, hitting or damaging or stealing property); verbal (name-calling, hurtful teasing, insults or humiliating or threatening someone); social (excluding someone from a group or an activity, gossiping or spreading rumours about someone); or electronic (using the internet or a mobile phone or device to send e-mails, text messages or pictures to threaten someone or hurt their feelings).  More than three-quarters of female survey respondents and 60% of male respondents reported all types of bullying caused harm to children.  The next most commonly reported type of bullying causing harm was social bullying (figure 3). 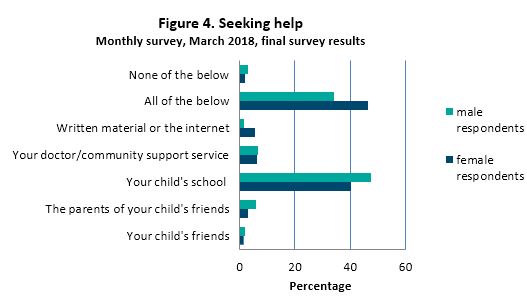 The majority of survey respondents (52%) indicated a preference for a range of actions to improve the handling of bullying (figure 6).  The second most commonly preferred action for improving the handling of bullying was to engage experts to teach children about bullying and respectful behaviour (23%) followed by inviting parents to participate in bullying programs (11%).