Evidence consistently shows that same-sex attracted people experience high levels of discrimination, including in the workplace, schools and hospitals.  Discrimination may result in conflicted family and other social relationships and diminished emotional and practical support, despite the support of family, friends and, to a lesser extent, professionals having been shown to lessen the destructive impacts of homophobia (Hillier et. al 2005, Green, 2004; Greenan & Tunnell, 2003).

The term ‘minority stress’ captures the negative effects associated with the adverse social conditions experienced by members of a stigmatised social group (DiPlacido, 1998).  Minority stress increases vulnerability to mental and physical illness.  This is not as a result of identifying as gay, lesbian, bisexual or transgender per se, rather the associated interpersonal difficulties that arise from stigma and non-acceptance from the general community (Psychologists for Marriage Equality, 2012).

Same-sex couples also often face intense scrutiny over their capabilities as parents, based solely on their sexual orientation.  These beliefs are often not based on personal experience and evidence, but on culturally transmitted myths and stereotypes (Psychologists for Marriage Equality, 1998).

The focus of November’s online survey was to ascertain the views of visitors to the Relationships Australia website on marriage equality. 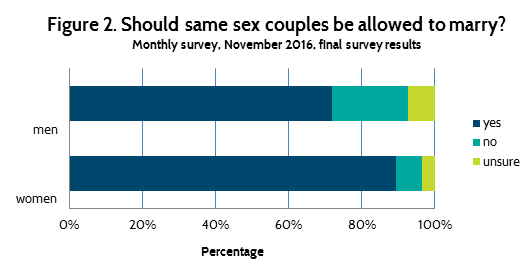 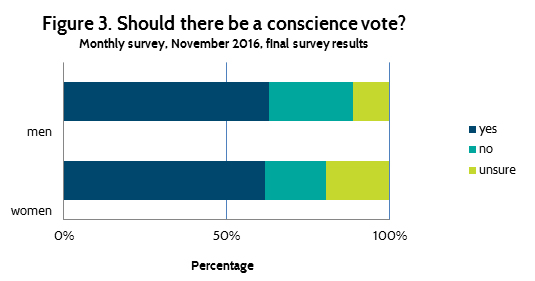 The majority of survey respondents did not support a plebiscite or referendum on the issue of same-sex marriage (figure 4).

The majority of survey respondents also reported that they thought same-sex marriage was inevitable (women – 85%, men – 75%).

Hillier, L, Turner, A and Mitchell, A, 2005, Writing themselves in again: 6 years on, the 2nd national report on the sexuality, health & well-being of same sex attracted young people in Australia, mon. series no. 50, Melb: Australian Centre for Sex, Health and Society.